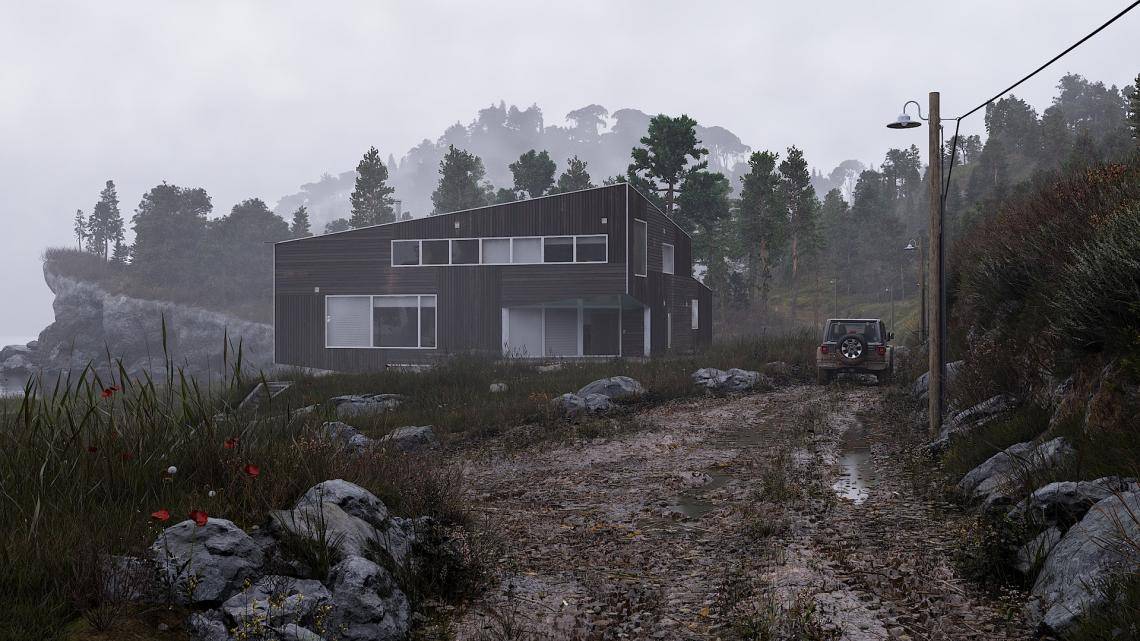 Elias Prapas created this fantastic moody image based on the Triangle House by Jarmund/Vigsnæs AS Arkitekter MNAL and was generous enough to tell us a little about how it was created:

"When I started working on this project I hadn’t decided which viewing angles will be used for the final renders. I knew that I had to build the majority of the scene first and decide on the camera views later. This way I could render whichever view looked best without being restrained by the existing geometry.

"This meant that I had to cover the large surrounding landscape with lots of trees, vegetation and other assets so as to cover every possible viewing angle. An impossible task to complete without the use of ForestPack which was used in almost every aspect of the surrounding environment. The road had to be a muddy country road with a variety of small (and some bigger) stones scattered along the way. ForestPack was also used to scatter twigs and leaves throughout the length of the road and to place plants in the middle of the road. I was able to control the placement of all these scatters by using just one single spline and taking advantage of the scale and density falloff controls. Since displacement was used on the road’s surface (puddles, tire tracks, e.t.c.) the “displacement effect” included with Forest Pack was an essential tool in order to get the correct end result.

"Rocks along the road’s sides and the lake’s shoreline were also placed with the use of ForestPack. This time “Custom Edit” mode was used because I wanted to have better control of the placement of the rocks. A great way to control your scatters and combine it with ForestPack’s display and memory optimizations.

"In the foreground and close to the building I used low height vegetation. I created custom paint areas to control which species were placed in which area and with what density. In the background and around the house I scattered taller vegetation. Because these would not about to be seen from a close distance I could use ForestLOD objects to mix three different levels of plants resolution for further memory optimization. The same practice was used for the trees. High-resolution trees (for the foreground) and two levels of lower resolution (for the background) were combined in ForestLOD objects and then scattered with Forest Pro. Billboard trees scattered with ForestPack were used for those that were the furthest away and mostly covered with fog."

It’s obvious that without the use of Forest Pack the completion of this project would be an impossible mission. I consider it to be an invaluable asset in my arsenal for everyday work. I want to thank iToo for the amazing tools and the continuous support they offer!