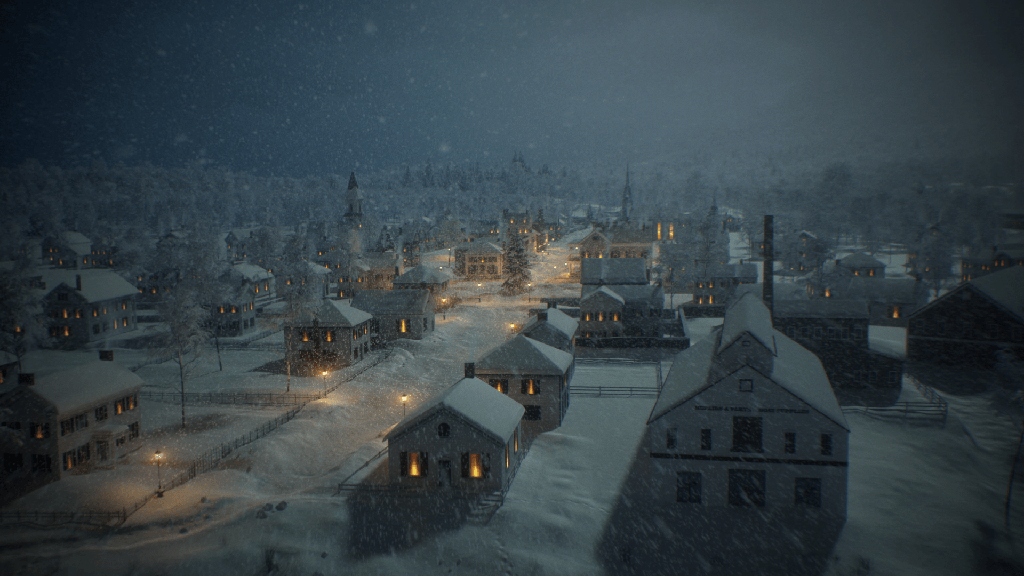 Whenever a 3d artist is asked to describe what exactly it is that they do, trepidation sets in. Having to explain the arcane day-to-day travails of a CG artist to someone unfamiliar with our field can lead to head-scratching, brow-furrowing and glazed eyes.

Our best chance is to appeal to some common cultural ground. “You know in Minecraft, the the ways levels are built? It’s nothing like that…” or, “You know In Star Wars: Rogue One? Someone has to make and plant all the 3d trees surrounding the citadel tower on the planet of Scarif - that’s sort of what I do - only less cool. “

Seldom do we think to start with “You know, in Tchaikovsky’s Miniature Overture?…”

Not so for artists at Straighface Studios, based in Seattle, whose animated films have illuminated the stage of spacecraft/guitar loving rock icons Boston, and the Pacific Northwest Ballet’s reboot of the Nutcracker Suite.

In the spring of 2015, PNB decided to update their yearly production of The Nutcracker after a nearly 30-year run. The new concept included an animated introduction to the ballet. Straightface Studios won the bid to create the film in April and set to work with a core team of just three generalists, a character animator, a producer, and a creative director. The premiere was in November, so they had to hit the ground running to complete this huge task in time. 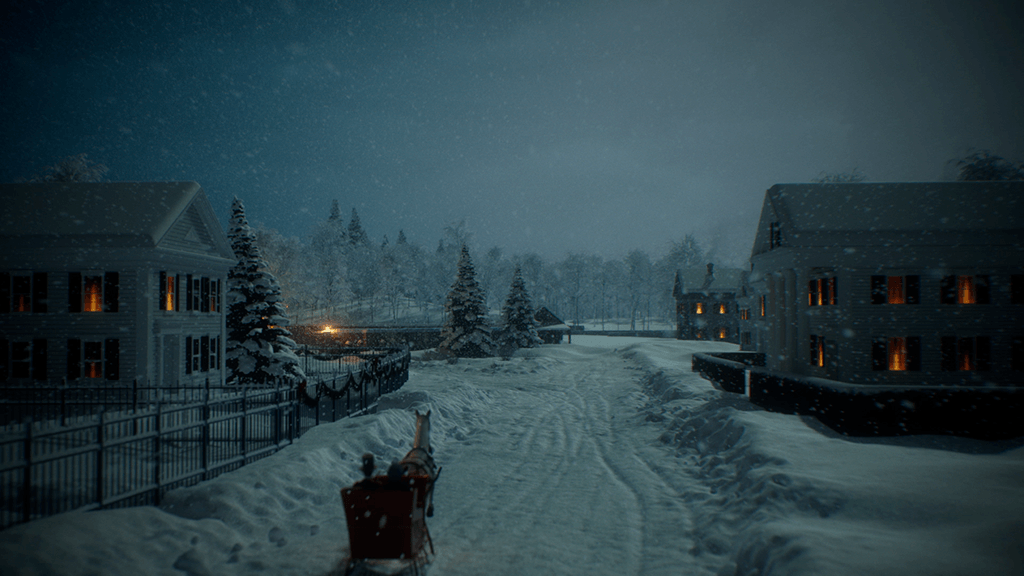 “Being such a small team, we all did a little of everything” Straightface Studios' Guy Paquin tells us, “but we had some specialisms. I took care of art direction, scene layout and compositing; Mike Hanson was responsible for modelling, texturing and rigging; character animation was created by Thomas Huang; and Gavin Greenwalt tackled lighting, compositing, snow simulation and creating the forests”.

“For a boutique studio like ours, PNB are the perfect clients.” Guy tells us, “Our approach is very collaborative. We love working with clients who have an idea of what they want and are willing to trust us to bring that idea to life and create something beautiful and engaging.”

CG goes to the Ballet

PNB’s previous performances of the Miniature Overture were accompanied by a simple static image, but Peter Boal, the Artistic Director of the PNB, and Ian Falconer, creator of the Olivia the Pig children's books, had much more ambitious plans for the new version. “They had an original vision for an updated Nutcracker concept.” Guy says, “They proposed the idea of an animated flyover though a snow-shrouded forest and town. To fully integrate the animation into the live performance, the end frame duplicates the backdrop of the opening scene of the ballet, creating a seamless transition.

“This presented a challenge” Guy continues, “we didn’t have a lot of access to the venue to test the video and make sure everything looked right. The ballet was extremely accommodating to our needs, but they had other performances in the months leading up to The Nutcracker. That meant there was no projection screen available to test on until very late in the schedule. Elements on screen at the end of the video had to line up with real elements on stage to achieve the effect of blending from the video to the live performance. We only had a few opportunities to test the animation and make necessary changes before the first performance”. In these circumstances, being able to make changes quickly is of paramount importance.

Another unique aspect of creating animations for live events is the absence of a locked-down sound track. Musicians' performances vary night by night, that’s partly what makes live event so exciting, but for animators it means you have to deviate from tried and tested workflows, plan and edit your work in a different way. “We had to keep in mind the slight variations when choreographing the video. We couldn't time events to happen on specific beats because the live orchestra's tempo would change slightly each time.” 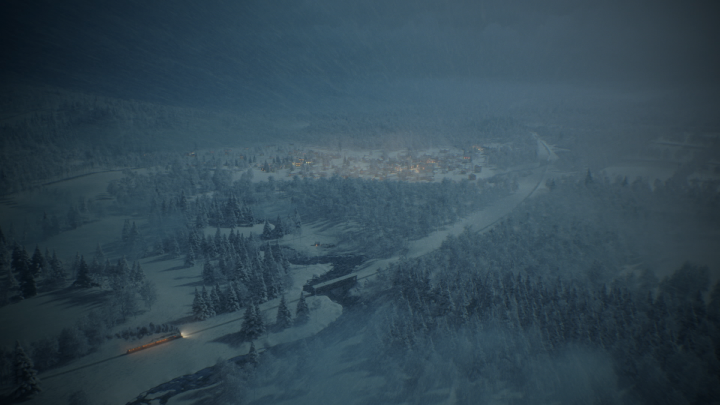 The task of recreating a whole New England town presented its own hurdles. At over 7 kilometers wide - packed with more than 1.5 million trees, 8540 bushes, 287 3d buildings, plus thousands of other elements including 7 CG mice - creating and rendering this scene was no picnic. Straighface Studios' render farm machines have a 32gb RAM limit, so to render a scene of this size involved several memory saving tricks including extensive instancing, V-Ray Proxies, texture baking and using LOD objects whenever possible.

“After extensive testing we determined it would take a month to complete the necessary 150,000 core hours of rendering on our farm” Guy explains, “Forest Pack Pro and RailClone Pro played a critical role in overcoming this challenge”.

Journey through the snow

Early on in the production, the team realised that an even distribution of trees on the mountain didn’t look realistic. In reality dead trees, wind, changes in soil makeup and density, access and proximity to water light, plus many other environmental factors cause gaps and variation in a forest’s density.

To recreate this complex effect the team used a simple and art-directable solution: use closed splines as exclude areas to remove trees and create clearings. “The parametric nature of Forest Pack is perfect for fast iteration” Guy says, “trying out different options of where to clear out the trees was as simple as moving the splines or creating new ones.“ 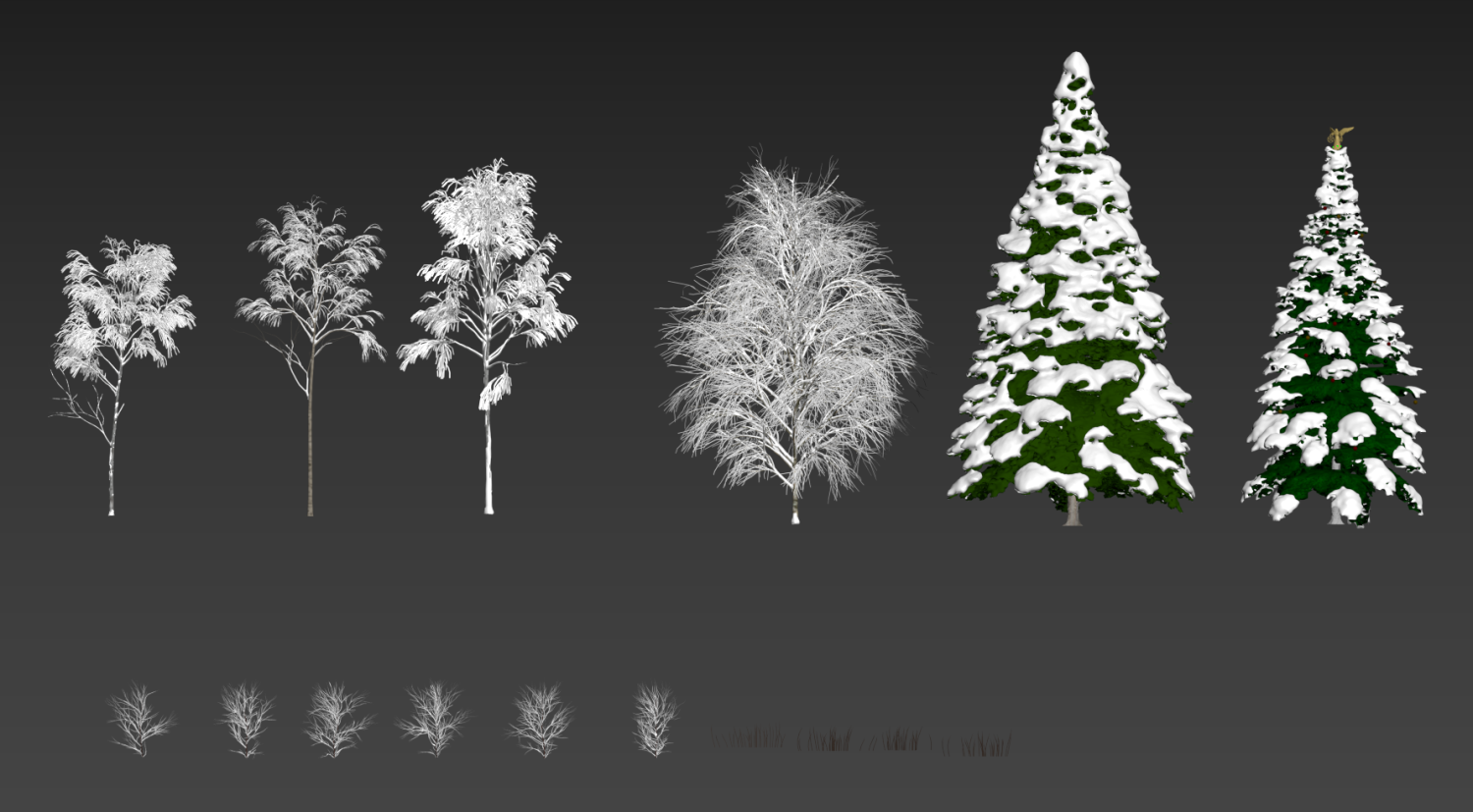 All of the foliage in the scene was modelled with SpeedTree and ZBrush, but the actual number of unique meshes is not as high as one would think. Each snow covered pine seen in the video is actually a instance of a single tree model. Guy explains that they “used Forest Pack's ability to randomize size and rotation to create the impression of a variety of trees, while greatly reducing memory usage.” 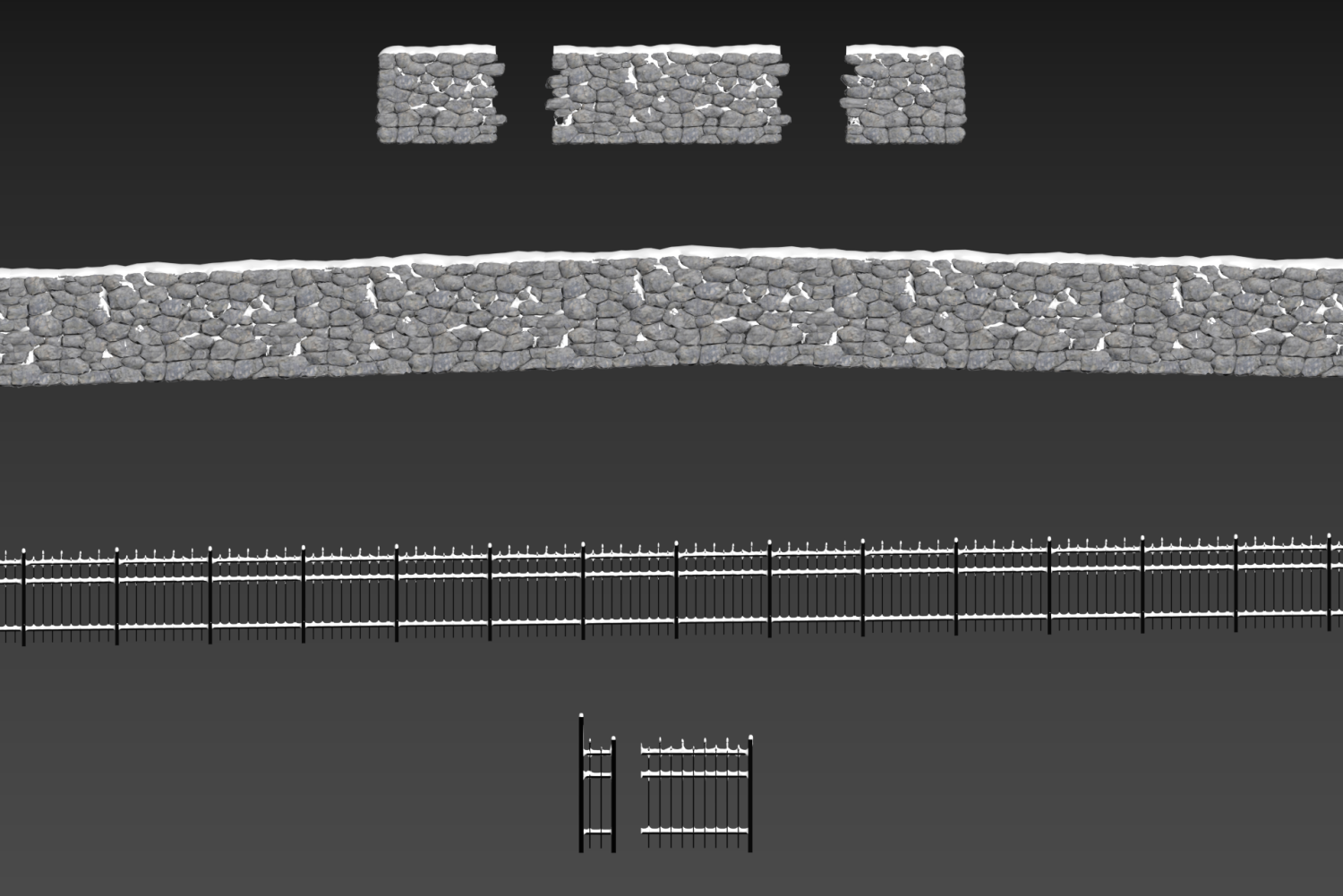 To populate the RailClone objects, the team built several kinds of wood and iron fences as well as low stone walls that could be distributed using simple splines throughout the scene. Small modular pieces were needed - in this case only 3 types for each fence  - a start, repeating middle section and an end. The simplicity made setting up the RailClone style extremely straightforward. 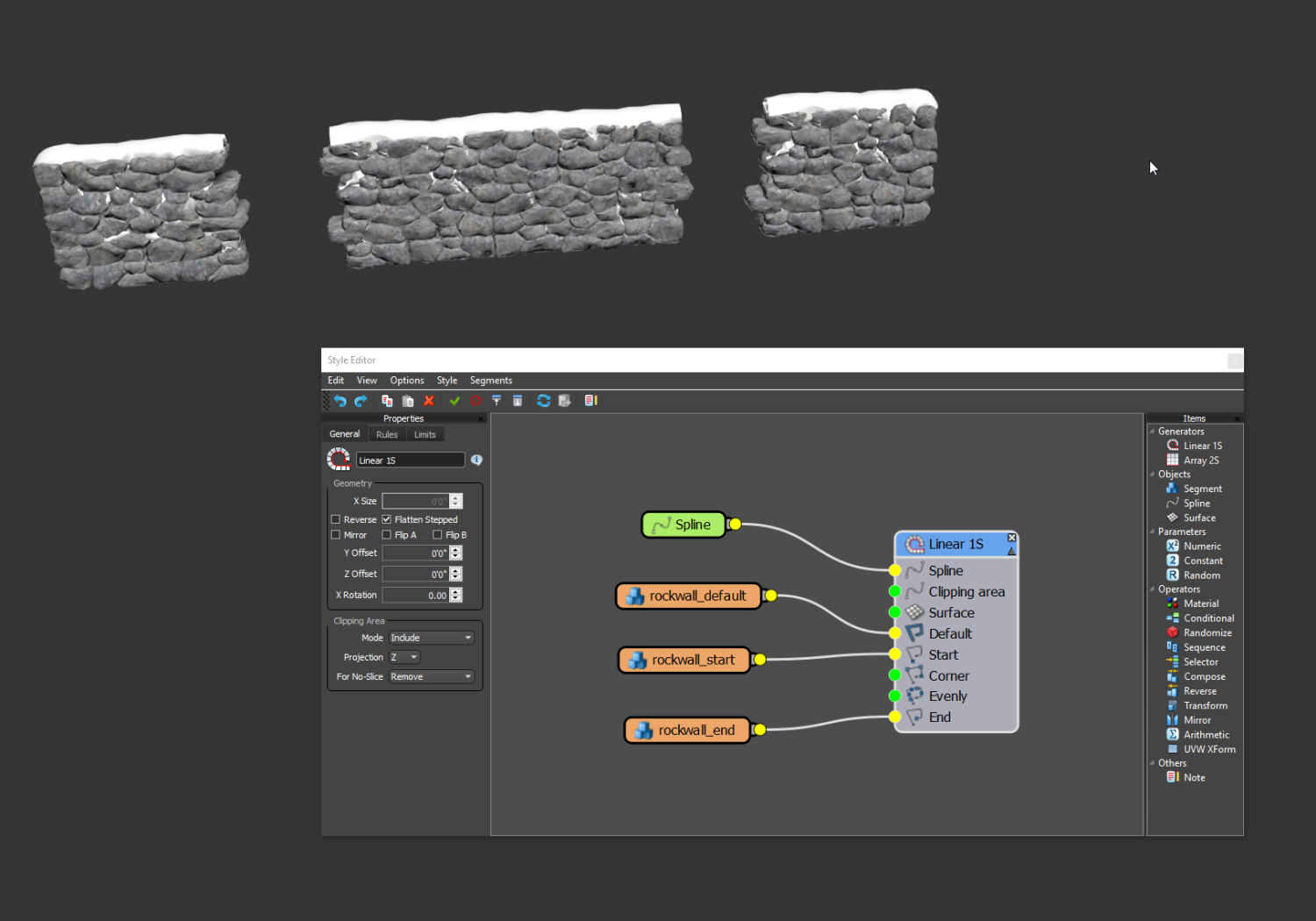 Example RailClone graph used to create the walls and fences

“We also used RailClone to create the train tracks and the ground surrounding them." Guy explains, "The path of the tracks changed several times over the course of the production and it was as simple as moving the points on a spline. With our short timeline and somewhat limited RAM, we needed a way to quickly lay out and render these elements. RailClone delivered.”

Not just for forests

Despite it’s name, Forest Pack isn’t just for trees. Guy tells us ,“we used Forest Pack extensively to add detail to other areas in the town. It enabled us to easily add rocks on the river bank and shrubs and grasses in the surrounding areas to add visual complexity to the scene”

Using a tool extensively for a project you get a pretty good idea of what were the most useful features. For the Nutcracker overture, the team at Straightface Studios' listed the number one feature of Forest Pack and RailClone as the parametric workflow, allowing for changes to be made quickly and with minimal fuss. "The ease of making drastic changes by simple means such as adjusting the distribution maps, spline controls, and probability percentages was invaluable” Guy explains, “and for working with large amounts of geometry in Forest Pack, the Limit to Visibility checkbox under the Camera tab is a lifesaver. It will only build items the camera can see, and those are the only items you really need. For fine tuning, The Paint Area tool set to Exclude is an easy way to get rid of specific items you don't want. Just click on it in the viewport and it's gone!” 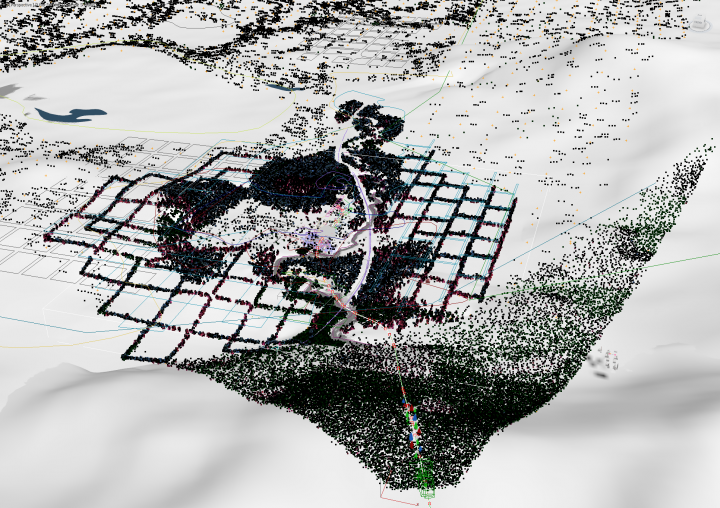 Following the Nutcracker Overture animation, Straightface Studios were commissioned to produce a 4 minute animation for Boston’s Cool The Engines. “This was our first foray into live concert videos. “ Guy tells us, “All the artists here are big science fiction fans, so we were excited to make a giant, guitar-shaped spaceship careening through the galaxy. We used Forest Pack Pro to populate the forest on the alien planet at the end of the guitar ship's journey. The timeline was condensed on that job and Forest Pack made it easy to try out different looks for the alien forest in a short amount of time.”

No escape from Forest Pack and RailClone 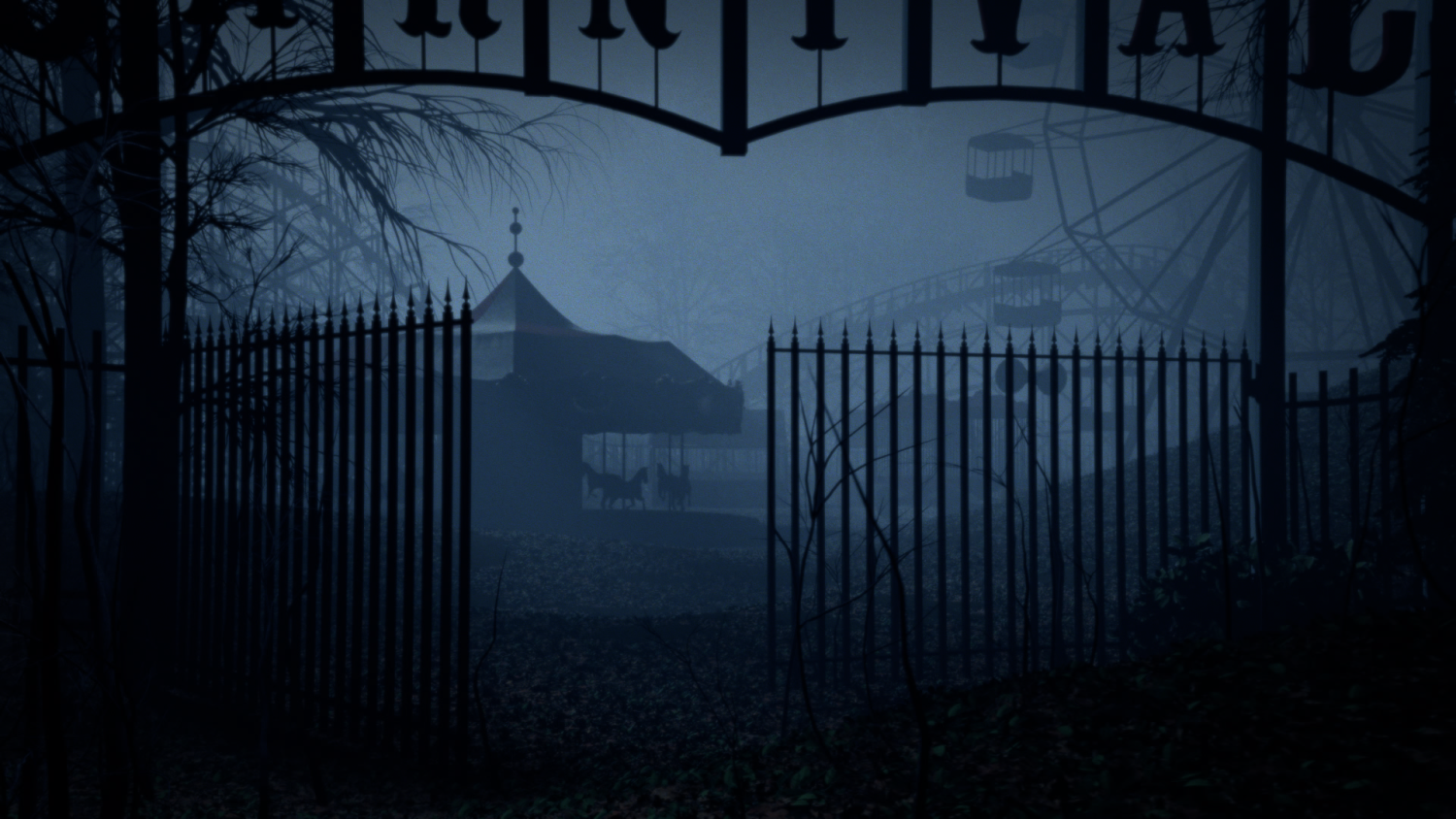 The lessons learned on these live event films proved invaluable for Straightface Studios' next project. A short animated introduction for an escape room company. “The theme was a haunted carnival that mysteriously appeared in a spooky forest.” Guy tells us, “The animation sets the tone for the people who are about to get locked in a room to solve carnival-related puzzles in order to escape.”

“The project had an extremely short timeline, so once again we used Forest Pack extensively to populate the scene with trees and other foliage. We placed almost everything on screen using Forest Pack, and even created some of the carnival rides with RailClone.

Following the success of the Nutcracker animation, Straightface Studios are working once more with Boston to create concert videos for their tours, and have plans to continue to expand their live projects work to complement their existing video production, animation and VFX portfolio. Never ones to rest on their laurels, the team also spent their spare time over a 6 month period revisiting the Nutcracker animation to improve any elements they weren't happy with ready for the 2016 season. They've also recently completed a second curtain call for Pacific Northwest Ballet's performance of the Nutcracker Suite to accompany the violin solo, incorporating cast members into the video to further connect the live dance to the animation.

Working on films to accompany live performance is a growing niche in our industry, and an exciting opportunity. Guy tells us “watching the final product at the theatre and hearing the applause was a unique and rewarding experience.”

Of the Future by BB3viz 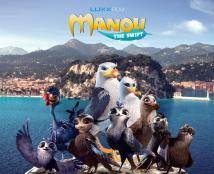 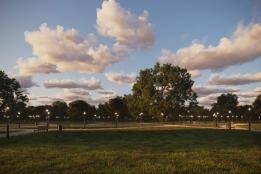