In this Tips & Tricks tutorial for Forest Pack we look at the many options for scattering objects on uneven terrain. It's not often the case that we place scattered objects on a truly planar surface, instead in many scenes we have banks, mounds, hills, and even vertiginous mountains. Forest Pack not only allows you to place geometry on non-planar surface with a minimum of effort, but also gives you a high level of control, with the ability to control the density and scale of the scattered objects based on the altitude and slope angle of the terrain.

By completing this tutorial you will be able to:

The exercise files for this tutorial includes the following .max scenes compatible with Max 2011 and V-Ray.

Getting started with Surfaces

Before looking at an example, we'll take a look at the surface controls in more detail.

At the top of the rollout is the Surface list, this allow you to add extra surfaces by clicking on the

to add multiple surfaces. If you change a surface and wish to update Forest Pack simply click

, if you would Forest to update automatically or if the surface is animated and you need the scattered objects to follow the geometry then turn on Auto.

Surfaces can be used in two modes. The default is XY which projects objects along their Z axis until they meet the surface geometry, this is ideal for landscapes without steep inclines.

XY mode uses the surface's face normals direction to place objects so if a surface doesn't appear to be working, try inverting the normals to check that they are facing in the correct direction. This can often be a problem with surfaces imported from other applications

For steep inclines or geometry with slopes greater than 90 degrees from the XY Plane, UV mode uses the mapping coordinates of the surface to distribute the objects. In this tutorial we are going to focus on the XY mode, we'll explore UV modes in more detail in a future tips and tricks instalment.

The direction slider allows you to align the segments in relation to the surface's face normals. At 0% the scattered objects follow the surface normal, at 100% they always face upward and at -100% they face down.

When Altitude Range Limit is on, scattered objects will only appear within the height range defined by the Top and Bottom values. If you don't want a sharply defined boundary or if you want to create layers or other effects, then a falloff curve gives you precise control of the density of scattered objects across this range. The rate and extent of the falloff effect is defined by the curve editor where the X axis plots the altitude range between the Top and Bottom values.

The scale falloff curve works in a similar way, allowing you to control the scale of scattered objects over the altitude range. You could for example reduce the size of the trees at higher altitudes where in reality oxygen may be thinner.

Activating slope range allows you to use the angle of the surface to limit the distribution of scattered objects. The Min and Max values define the angle, measured in degrees, where 0 is fully horizontal and 90 is completely vertical. As with altitude range, you are able to use falloff curves to precisely control the density and size of scattered objects based on the angle of the underlying surface. 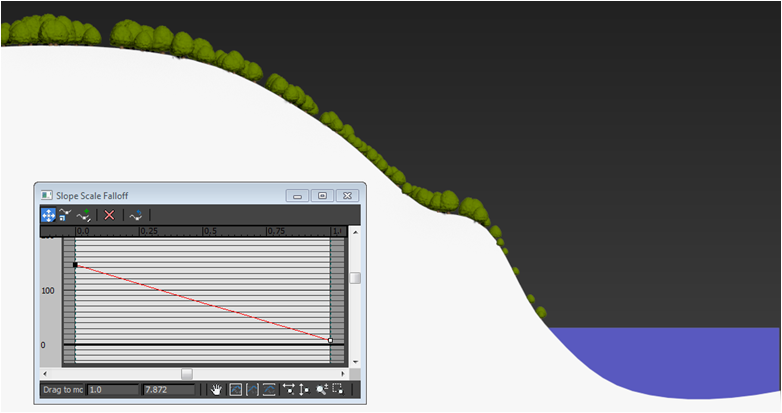 That's the theory, let's put some of these features to use on a simple scene.

When first selecting the terrain you may get a warning that Maximum Density has been reached.

This is because the number of trees being created has exceeded the maximum number specified by the Max Density value found in the distribution map rollout. In this example we will be limiting the trees to within the camera frustum so the number of scattered trees will soon be substantially reduced. You can safely click Do not show this message again and then OK. If necessary you can also increase the Max Density value.

Finally, lets combine surfaces with spline painting layers and falloff to quickly add some grass the the shore near the camera.

Using these techniques gives you a high level of control over the distribution of objects on surfaces. Though this example focused on trees in a landscape the same principles can easily be applied for myriad other less obvious uses. For example you may wish to use forest to distribute leaves on climbing vines, controlling leaf age and density based on height, or place beads of condensation on a glass using falloff to control their size and density as they move away from the cool liquid within. 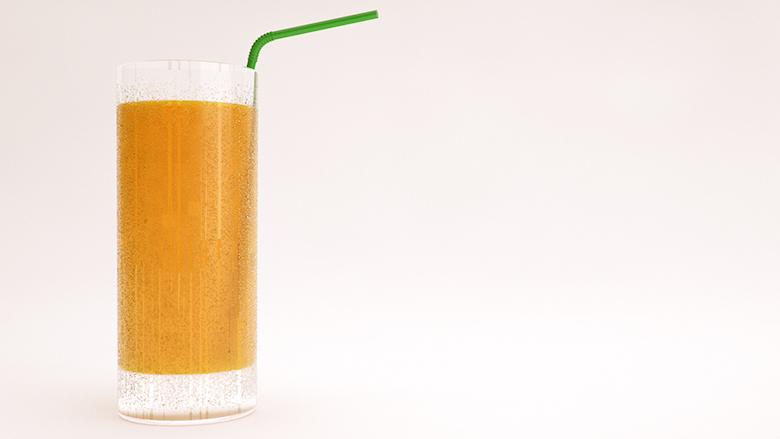 Stay tuned for future Forest Pack tutorials, meanwhile for more information about many aspects of Forest Pack's features please see our reference section or visit the tutorials page for more Tips and Tricks videos as well as in-depth tutorials.