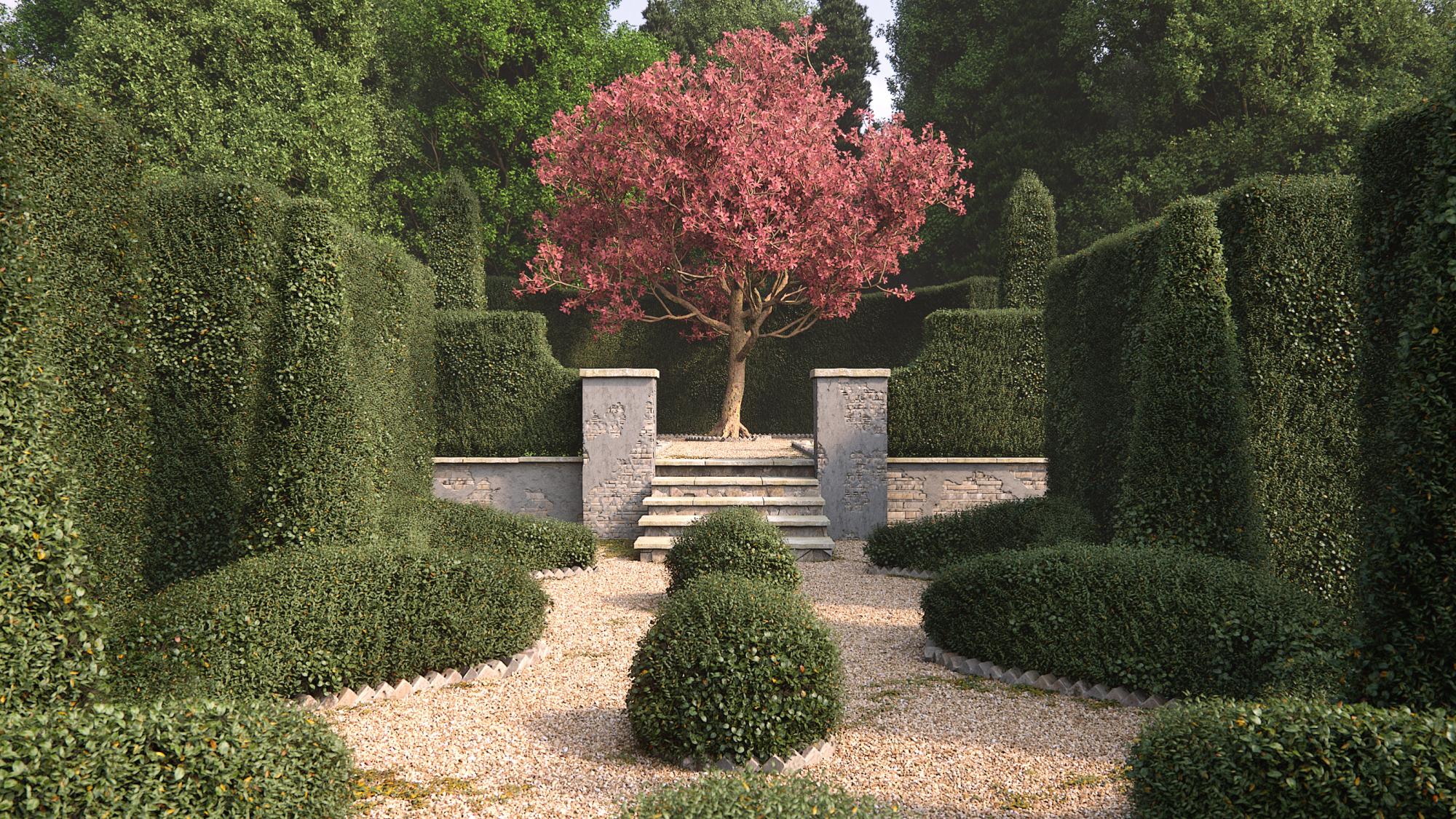 We frequently get asked how to create trimmed hedges and topiary using Forest Pack. In this tutorial we'll look at two possible approaches: firstly using pre-built hedge components that fit together like a jigsaw; and secondly how to use hedge volumes modelled using standard poly tools to scatter leafs and branches using Forest Pack Pro. To finish up we include a bonus section that explains how to create a RailClone style that can be used as a scatter surface for Forest Pack to create a fully parametric setup.

By completing this tutorial you will be able to:

This tutorial uses Forest Pack Pro. For the bonus section at the end RailClone Lite is also required, this is free and can be downloaded from the bottom of the product page.

The render for this tutorial contains several models courtesy of Evermotion and Laubwerk that are not included in the download. .

Several libraries include hedge models that can be dropped into the scene and used immediately. In addition to speed of setup, this approach benefits from the fact that library hedge models often include the trunk and branches, so if the interior of the hedge is likely to be seen, then this the way to go. Using these models is straightforward, just pick them from your scene and then use Tree Editor mode to position them exactly where they are needed. Here's an example of how to do this: 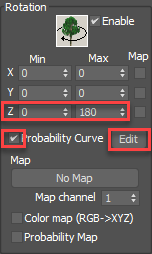 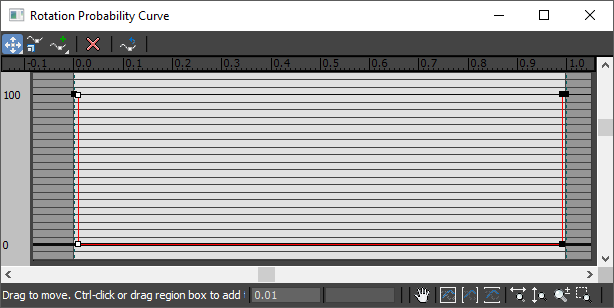 In addition to manually assembling the hedges in your scenes, you can also distribute them along a spline, to do this:

Using hedge models is as easy as that. Assuming you have access to a library of hedge objects for many scenarios this is the fastest way to populate scenes, however problems arise with this technique when:

In these situations creating your own shapes by scattering leaves and branches on a hedge volume using Forest Pack Pro may be more appropriate, and is certainly the more flexible approach. Here's how it can be done. 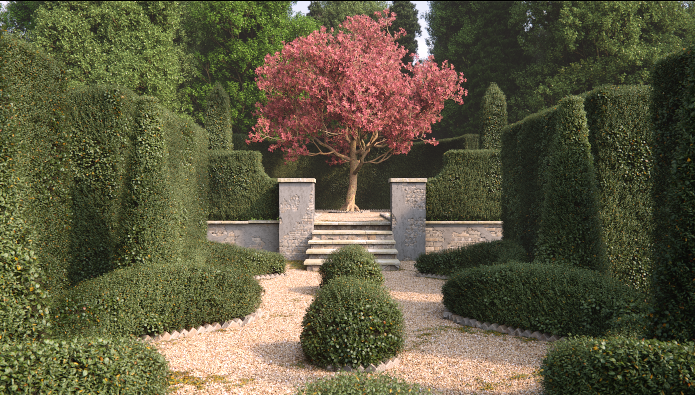 In this part of the tutorial we'll use our own volumes with Forest Pack to scatter leaves and branches on their surfaces. In the scene above for example we have several hedge shapes; some are simple rectangles, some are topiary balls, there's a curved hedge at the back , and even some cones and obelisks.

To create these hedges there are 3 things that should be considered: geometry, scatter settings, and materials. Let's take a look at each one in turn.

The leaves and branches to be scattered is fairly straightforward to create. In this example they were modelled with GrowFX but it is also common to extract leaves and branches from existing plant models. In the downloads for the tutorial there are two types of hedge model , each with 3 variations. These differ slightly for extra variety, but crucially also include differences in leaf density. Hedges are often not evenly covered with the same density of leaves and some sparser patches are visible through which the branches can be seen. By scattering occasional branches with fewer leaves we are able to simulate that effect. In addition enough branch should be included so that we can give the impression that the hedge has an interior, and is not simply hollow. The objects used in the tutorial can be seen below.

The pivot should be moved to the top of the plant. This is perhaps the most important step. It is tempting and seems logical to place the pivot at the bottom of the branch, but this introduces a couple of issues. First of all, it places the objects on the surface of the geometry, causing the size of the hedge to be larger than the volume. This make it hard to visualise the final size when you're modelling the hedge volumes. Another problem occurs if If you want to randomise the size of the leaves to add some variety as you will also introduce unevenness to the surface of the hedge. This is fine if you're creating a wild hedge, but not so good if the hedge is supposed to be freshly trimmed. Random rotation will cause similar surface unevenness.

To resolve this move the pivot to the top of the branch so that it acts as the pivot for all scale and rotation operations, maintaining more accurately the volume defined by the scatter surface. 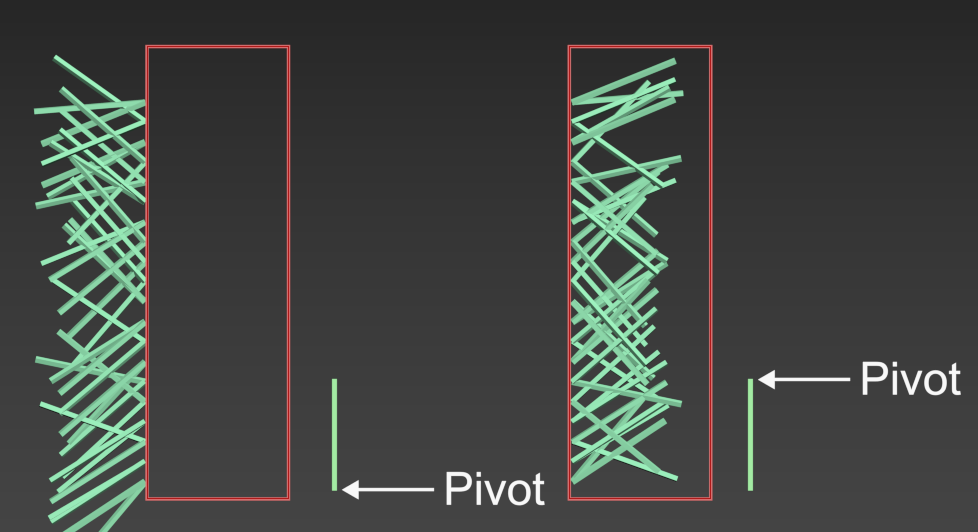 The second type of geometry is the scatter surfaces themselves. These are also straightforward. In most cases you should avoid 90 degree angles so chamfer hard edges,  as well as removing polygons from the bottom of objects unless for some reason you need branches protruding downwards from the bottom of the hedge. Below you can see the scatter surfaces for our test scene. 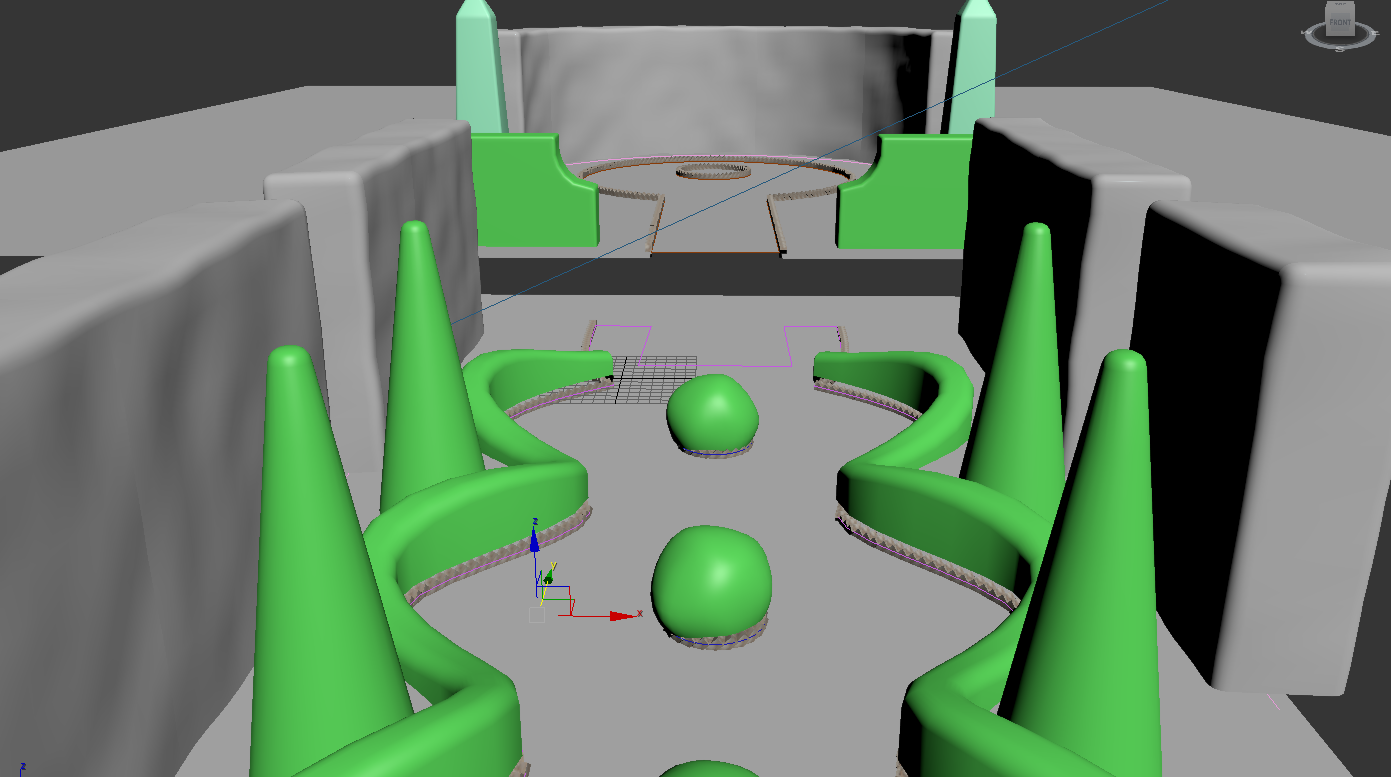 Most importantly, you need to create evenly distributed UVWs. Forest uses these to place the distribution map so they need to be approximately the same density throughout  the model; not necessarily seamless, but roughly the same texel size. The size should also be the same for surfaces that will be used in the same Forest Object, it makes it much easy to get the correct distribution map settings. Below you can see how the UVW's in our test scene look when we apply a UVW override map. 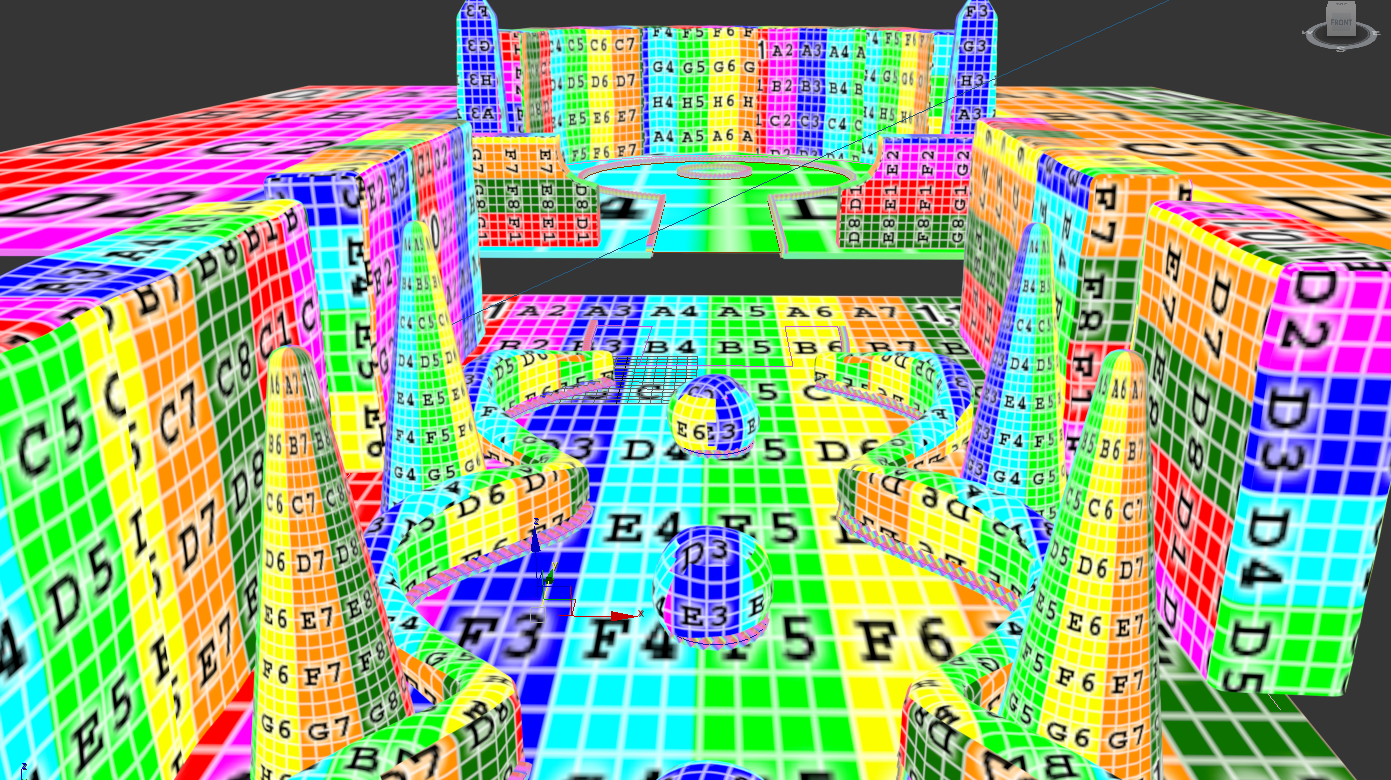 You'll notice on the larger hedges, the curved one at the back for example, that the UVWs are also randomly offset. This is important, as several of Forest Pack's features - for instance: clustering, choosing scatter items and random transforms  - are generated internally based on an items position in UVW space. Randomising UVW offsets therefore avoids any visual repetition. Later on I'll demonstrate how RailClone can be used to create hedge volumes that offset UVWs automatically.

To create the Forest Pack object and configure the scatter parameters we need to focus on only a few important settings:

That's the scatter set up. We can now move on to randomising the materials to add even more variety.

In this section we'll look at randomising maps using Forest Color, before changing anything let's look at how the current material looks. It uses a single bitmap all the leaves. 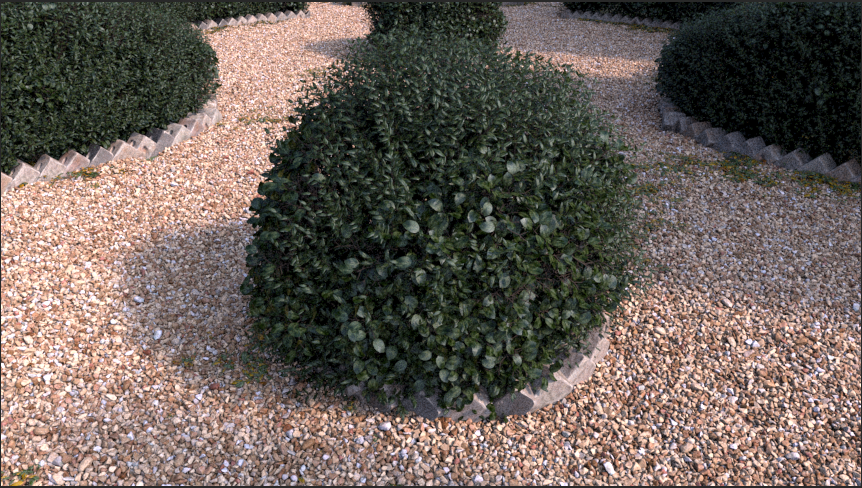 Far too uniform! For greater realism it's a good idea to randomise between several leaf textures using Forest Color. Leaves on hedges are seldom all this healthy, so to add more realism and simulate some dying leaves we'll use 4 types of leaf map - one that is fully green and healthy, one that's starting to yellow, one that's yellow and then finally a dead brown leaf.

These are wired to a Forest Colour map. If we render it now there are far too many dead and dying leaves in the hedge (although it might be more useful for an autumn scene!). 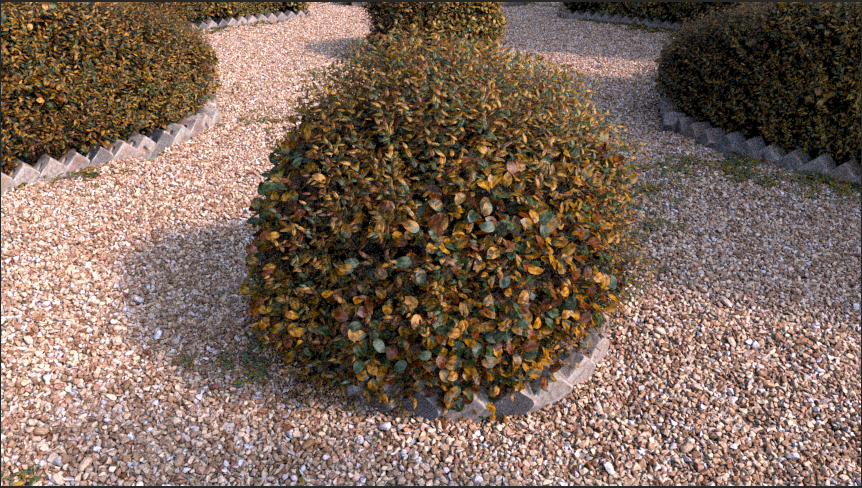 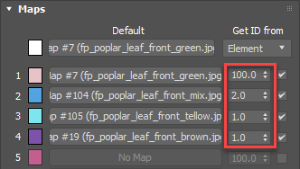 To add further variation you can randomise the brightness of the leaves. To do this 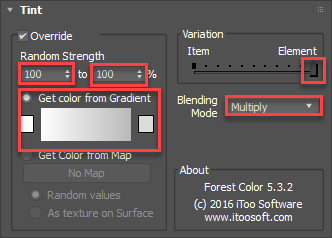 Finally you can add some colour changes in larger patches on hedges to break up the uniformity. To do this:

If you render now you'll have a lot more natural variation compared to our starting image. 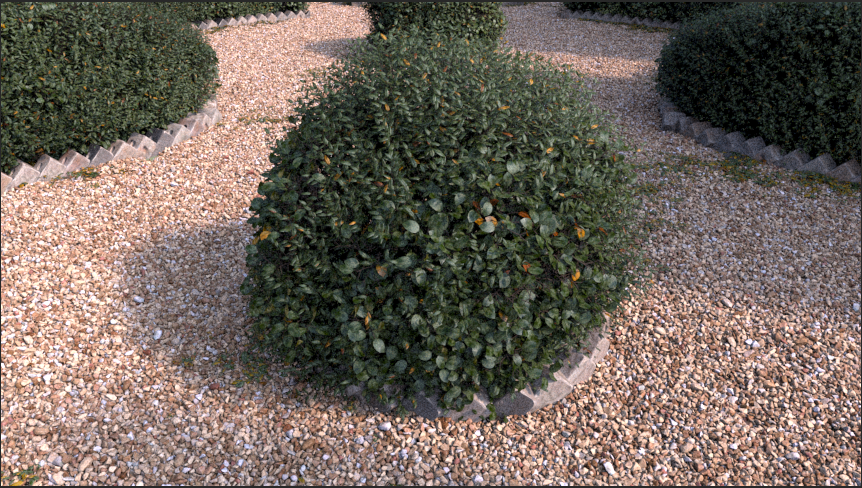 Bonus - RailClone as a scatter source for hedges

To finish this tutorial it's worth looking at how RailClone can be used as a surface for Forest Pack. This is ideal for creating hedges as both scatter and hedge volume can remain fully parametric.

We need only three segments for this setup, a start, a middle and an end. Just like we discussed earlier in the tutorial, the geometry has been UV mapped, corners have been chamfered and the bottom has been removed. 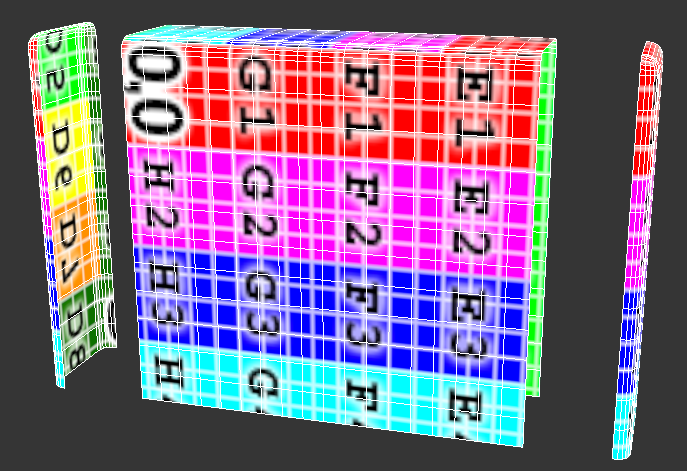 To use these to build a new RailClone style:

In this tutorial we demonstrated two ways of creating hedges, first using prefabricated models and secondly a more flexible approach that can be used to create many different sizes and shapes of hedge and topiary. This tutorial follows on from our Scattering on Vertical Surfaces tutorial and the Scattering on Surfaces 10 Second Tip, so please feel free to check these out to see some of these principles applied in a different context. If you create any hedges for your scenes using these techniques or you have any tips you'd like to share for creating these kinds of objects we'd love to see them on our forum. Otherwise, stay tuned for our next tips and tricks instalment and check out our other videos in the tutorials section of the website.